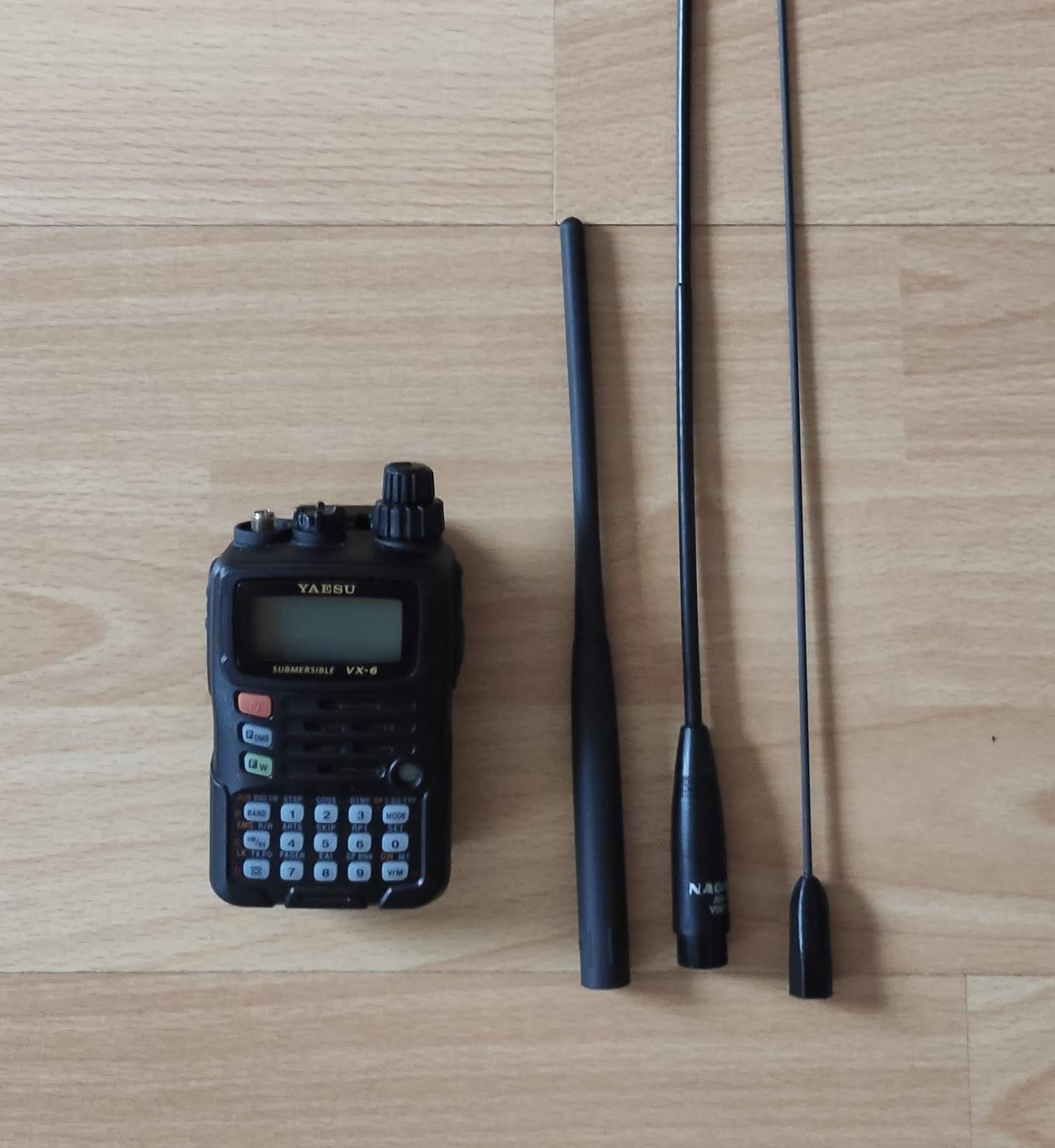 I got a new handheld radio and obviosly matching antennas. But how good are they? So I measured them as good as I could.

I have three antennas I want to compare. The stock antenna that shipped with the radio, a Nagoya NA-771 (hopefully original) and a Super elastic signal stick.

The first thing I wanted to know, is if there is a difference in signal strength coming from the antenna. I used the radio at a defined position with the three antennas (one after another) and used the SDRPlay to record the spectrum. The absolut value don't matter and aren't calibrated in any form, it is just for comparision between each other.

The Nagoya seems to perfom the best. The Signal stick looks bad at 70cm and the Yaesu is a bit worse at 2m.

I switched the antennas. So a small antenna was fitted to the Yaesu VX-6 and the 3 test antennas were connected to the SDRPlay. I transmitted a constant tone and captured the spectrum again to see the different receive performances.

The differences aren't big, if we had to make a conclusion out of this, then the Nagoya performs the best, and the signal stick worst.

I measured the 3 antennas with the NanoVNA via the PC software.You can see in the plot small markers on the left for the 3m band and three markers on the right for the 70cm band.

There was a significant calibration error. The absolut numbers are way to low and the curve of the graphs can also not fully be trusted.

In the following table you can see the SWR value for the 70cm and 2m band.

For al three antennas you can see that the resonant points aren't at the "right" places. I am not sure if this is an error while measuring or what the problems are. The Nagoya got the best values.

I measured the 3 antennas with the N1201SA . The plots are pretty blurry but the numbers are again in the table below.

Note that the values here are much higher then with the NanoVNA. Obviously not both can be right. But the tendenciec are the same. The Nagoya also performed best.

What can we conclude with the data? All measurements point to the Nagoya as the best of my 3 antennas. Are these data representative for all of these antennas? A clear no! I have no idea if the Nagoya was really original and all antennas can have production variations, which could change the resonant freuqencies.

Can I trust the measurement

I hope that I didn't make any systematic errors, but: